Euro tunnel fires, Bio diesel and killer seaweed – why do I always think the worst? 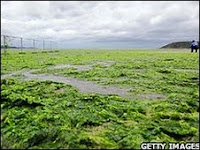 Why is it that I always think the worst? My Boys go with their Dad to visit Granny in Yorkshire and until I know they are there safe I worry. For three hours I worry, I can feel my grief welling up at the thought of losing them all in some freak accident on the A1 involving a high sided Eddie Stobart artic called Dolly Mae or Sally Anne.
I feel the emptiness and I wander their rooms touching their clothes, straightening their beds and putting their toys away.
I can’t settle at all, the TV can’t distract me and I daren’t leave the house in case I get the call from the police or they come round for a visit. I watch the clock incessantly. I have a bath, I read, I restart my elliptical manoeuvres round the house.
I pounce on every telephone call, curt and almost rude with those who ring for a chat too close to the time when I know they should be arriving. Then of course I miss the all important one, I’m outside putting he chickens to bed and it takes me half an hour to check the ansaphone and it’s fine they got there and then, well then I can go to sleep can’t I without a care in the world, until it’s time for them to return.
Now my mind is working overtime about our trip to France. Firstly a kindly dear overhearing me chatting about my trip as I cancel the newspapers in the Village Shop says that wasn’t there a fire in the Channel Tunnel recently and how she couldn’t bear to be trapped underneath all the water. I laugh, albeit a bit nervously, but on the walk back home I start to hyperventilate at the thought of thousands of tons of seawater rushing to swamp me and mine and all the people running screaming along the train but to no avail – strangely the vision looks very similar to that scene in the Dennis Quaid film The Day After Tomorrow when New York gets drowned.
Then my in-laws call to warn me to remember NOT to put bio diesel in my car or was it Gazoil and how will I know which is which? I have visions of my beautiful new car dying and the moment juste on the Autoroute and being flattened by a giant German Juggernaught because of a mistake made by me on the forecourt.
Finally just as I am getting to grips with the inevitability of the vacation, my Mother rings to tell me all about killer seaweed.
Apparently and this is true, tons of sea lettuce is washed up on the shores of the Cotes D’Armor in Brittany and it then rots giving off a bad egg smell. But the killer thing about it is that the sea washes over it leaving the seaweed covered in a layer of sand that then dries forming a crust and it is when the seaweed is rotting and the crust breaks from the pressure of animals and even people walking across it that hydrogen sulphide escapes totally over powering you and making you unconscious and even making you fall in a coma. Obviously the closer to the ground you are the more quickly you will be overcome. Several dogs have died and the Prime Minister of France has even stepped in saying that something must be done.
I can tell you after looking this up on the web, as I did not believe my Mum, my brain has been in overtime. I think I can probably keep my children safe by basically never letting them get more than three feet from me but what of Dear Charlie? The man is on a health kick and insists on going off running. How am I going to be able to protect him – I really, really do not want to be off running with him at 5.30am every other morning and besides who will prevent the children from chocking on their cereal or falling off their bunk beds?
Posted by Tattieweasle at 00:15 13 comments:

I am now hooked on getting the most miles per gallon out of my car. I’d like to think this will make me a better driver, safer, more considerate and a better bet for my insurer. But I don’t think so.

Nope. There is a tiny, iddy biddy bit of a glitch about all this, although it will help me save money on fuel and of course make me feel all warm and green woolly as I can do my bit for the environment - even if I am driving a turbo charged diesel around the country lanes – what they have done is kinda distracting.

It’s all VW’s fault, honest! They’ve got this computer thingy in my new Volkswagen Bluemotion Golf Estate that tells me how efficiently I am driving. Of course, the better I do that, the better my miles per gallon is and it tells me in real time too - there on the screen, in front of me; all in bright, angry glowing red so I can see it even in the dark.

It also has a clever arrow icon that comes on telling you when to change gear but I think it’s a bit slow on the uptake and I am already a little ahead of it. I tried to follow it on the drive home from the showroom earlier today, moving through the gears as, and when, it suggested. It got a bit exciting on the very steep left hand corner at the top of the hill where there is a reverse camber in the road and it told me to change up to fourth. I sloshed round the bend mightily fast with the big back end doing a cracking imitation of J-Lo shaking her derriere.

Good thing was I also got to test the ABS braking system at the same time, as I narrowly avoided ploughing into a tractor carting corn off the field next to the road. The farmer was pretty impressed too as he stopped to wave at me as I darted past – a flash of silver, a swirl of dust and all at 54mpg.

I don’t think that the short four-mile run from Barnards to home has helped me to get accustomed to the sheer size of the new car and I think I was a tad previous when I overtook the Tesco courtesy bus - but there again things are supposed to look larger in your rear view mirror are they not?

I was sad to say goodbye to the VW Polo but to be honest it was a bit of a mistake to buy it in the first place. The BIG idea last year was to exchange my beautiful but defunct Land Rover Discovery for a car for everyday rather than every eventuality. However, we went too far on the scaling down side and it became a bit of a problem deciding whether to bring home the weekly shop and the children at the same time. Eventuality I solved the problem by getting a lovely aerodynamic Thule Roof box and the shopping, rather than the children, came home in that – but it was usually a close run thing. Space was a premium in the Polo and with two booster chairs in the back there wasn’t much between, which usually led to much Argy Bargy, screams and whining and me blowing my top and vowing to attach the boys to the Thule just for the sake of some peace! Needless to say this was one threat my boys practically begged me to carry out. But, as I have said to them in the past, the purpose of a parent is to continually disappoint its offspring.

Another problem that came with the Polo was that I could not for the sake of love nor money get Bog Boy my youngest’s Mclaren buggy in the back without twisting the chassis and/or scratching the rear window – suffice to say Bog Boy learned to walk distances a tad earlier than his brother.

But these were minor day-to-day problems and easily outweighed by the fact that the savings on running costs compared to the Land Rover were in the region of £150 per month on fuel alone. Then there was the fact that being a much smaller, closer to the ground sort of vehicle, the school run was done considerably faster and dare I say it more safely, with less queasiness than previously.

The decision to get a slightly more spacious vehicle came about after the annual camping trip to Wales. This was when my husband, Dear Charlie, became personally aware the problems of trying to accommodate four dogs, two children, one Kyham six berth tent, four sleeping bags, four wet suits, two boogie boards, two double lilos, four pillows, buckets, spades, teddies and food for a small army - as he hates to shop when we are down there - all into a vehicle with a somewhat limited cubic capacity.

We still managed to get down there and back, not once but twice just to make sure. But the second time down we took the sports car too tossing a coin for who would drive the Mazda MX5 and have the relative luxury of only having to cope with one vomiting whippet plus sundry goods.

So, as with all decisions in our nuclear family, once made plans have to be put into action as swiftly as possible. It is with many thanks to the long-suffering folks at Barnards in Stowmarket, in particular David Webster, that within the space of three weeks the exchange was made.