Depression: I Love Ruby Wax but I'm keeping it secret...

Oh I loved Ruby Wax talking about her depression at BritMumsLive! It was funny, heart-breaking and way too close to the bone.
She said stand-up, be counted, but..oh yes there’s a but; she’s been filming people who do just that, who stand up and say they have a mental health problem in the workplace and guess what she’s having a hard time getting people to say a word.
I know that one so well…
In 1995 I was in a great job, I loved my job then one day I came in crying. I had broken up with my boyfriend and I stupidly let slip that I was on medication for depression. The fact is throughout my employment at that particular firm I had been on Prozac seems to have completely passed my employers by.
I mean only the week previously they had been talking about bonuses for the team which definitely included me. I was the account manager. I did the job standing on my head and still had time to juggle clinical depression, training for a North Pole expedition and balancing my bank account against my prediliction for Bond Street shops.
I’m a multi tasker - what can I say…
But within 24 hours I was asked to leave. Nothing was said as such about the D.E.P.R.E.S.S.I.O.N and I was too shell shocked and emotional to do anything about it at first. It was all done so very, very, nicely. I was given help to find a new job which they paid for and then I was let go. I think they told everyone that I was leaving voluntarily. As far as they were concerned they did everything right and proper. I suppose my problem was that I thought so too, that is until I took a long hard look at the legacy I was left with.
The feeling of tawdriness, uselessness, the feeling that I had done something wrong, that I was bad at my job, that I could never ever say a word about depression and my role in it to anyone. I had been gagged even before I had ever opened my mouth and suddenly it felt so fucking wrong!
And then I fought back.
I fought back like a vicious trapped weasel baring my teeth in a most unladylike manner. I went for them like something possessed but it pretty soon petered out, I am pretty ineffectual and a coward so even though I told my Union all about it we never fought about the dismissal in terms of them chucking me out because they had heard about my mental health issues, it was merely implied. I got £4K to shut up and got another job. The company I worked for have gone onto greater things in that dark and murky world of politcal lobbying. Bish Bosh over and done nobody the wiser and nobody hurt.
I have NEVER made the same mistake again. Paranoid, I was ever after that, about mentioning mental health issues in the workplace. Kept it quiet. That is until I finally started my polar adventures then I spoke up, big piece in The Times, stupid idea… but that’s another story for another day…
Check out Ruby Wax’s Black Dog Tribe….
Posted by Unknown at 12:29 7 comments:

Methinks I did but dream it.
But there is evidence to the contrary still strewn around my boudoir, waiting to be put away, sorted, dealt with, filed.
As I get back to the nitty gritty of daily life I catch myself smiling as little bits of the weekend flash past in the blink of an eye. Narrow and fat, hair, key and fill I am itching to get my camera out, looking to see if I can make it work. And my mind begins to wander instead of concentratingopn the matter at hand.
I imagine beautiful still lives a la the Dutch masters on great canvasses swamping my kitchen walls, being repinned on pintrest, admired and sought after. I could do it!
Then of course I'll hit upon a great blog theme, self host it and it will be brilliantly designed by my fair self. It will be promoted on Google Plus and Facebook, my twitter followers will be legion. I could do it!
I will become a guru and be invited to talk at BritMumsLive 2013. Oh how modest I'll be...oh complete bollocks....
Reality Check!
I've got laundry to do oodles of it because I've been away and no one else thought to even start the machine let alone get the dirty laundry downstairs. The house needs a great big fug out, a bit of spit and polish to bring it up to standard. It didn't get done while I was away and now I am back it becomes terribly noticeable. The weeds in my garden are actually threatening to start encroaching inside so bold they are and there is only one thing for it, I'll have to get out there and get a grip. The end of term is fast approaching and the boys have cricket matches, concerts and sports days all of which demand my undivided attention; that and trying to round up all their lost school uniform before the school is shut for the summer. Oh yes the summer, holidays and me in charge not just seven days a week but 24 hours a day as well as...
Is it no wonder that I think perchance I dreamt it all?
Posted by Unknown at 18:53 5 comments:

BritMumsLive! 2012 - feeling nervous, scared and not nearly ready to roll

So here I sit on my bed in the hotel room listening to the cacophony of the faceless men of the City go on around me. And I am bricking it, really I am. I always get overly nervous when I have to face a huge group of people whom I don't know very well, if at all. I feel slightly sick and there is a huge temptation not to venture forth at all. Just stay here in my little cocoon safe and sound with great wifi and a massive TV and just keep safe. But that is not option really. That would be a cop out, a waste of effort which has got me here so far; in my hotel room, a mere 250 feet from where it will all be happening in just over an hour. Little steps. I'll drop by and register, take a peek in. I don't have to stay at all, I can drift off, slip away, be not there if it all gets too much. I really should be over this by now. For Heaven's Sake I'm forty five years old and it's not school is it? These people are just like me love writing and blogging and connecting. Maybe it's because I don't get out much? Maybe I should just give it a go for the heck of it... Well here goes... See you down there!
Posted by Unknown at 13:04 11 comments:

So BritMumsLive! Conference tickets booked, train tickets booked, hotel  room reserved. Why, oh why, then, if I am that organised - and believe you me that is organised for me - can I not get my head round packing for this shindig?
The big problem is: What to Wear! Technically as long as I have suit, clean undies and a toothbrush I should be just fine but it’s not that kind of conference.
It’s one where there will be lots of other women. If it had been a normal workaday conference I wouldn’t give two hoots but because it is a conference where most, if not all, the delegates are female I am in a flat spin.
I want to be seen as smart and savvy but not off puttee and grand. I want to be approachable and affable and non-threatening but I want to swagger and show off too. I want to be noticed but not too much. I don’t want to be considered dowdy nor do I want to be mutton dressed up as lamb.
Heels or flats?
Shoes or boots?
Jeans or suits?
Mummy or business woman?
Do I need stuff for going out? Will I get that lucky and hook up with people who want to hang out with me and therefore give me a chance to go out in the first place or will I be Milly No Mates and land up eating a packed supper alone in my hotel room?
Will I be brave or scared rigid?
Will I do a runner when faced with a vast throng?
Will I plunge in regardless and fall flat on my face with a case of foot in mouth – I am so good at that game!
Or will I just wing it, along with my wardrobe …
Wave I’m the one getting it disastrously wrong!
Posted by Unknown at 23:04 4 comments:

Email ThisBlogThis!Share to TwitterShare to FacebookShare to Pinterest
Labels: BritMumsLive, conference, organsiation, what to wear 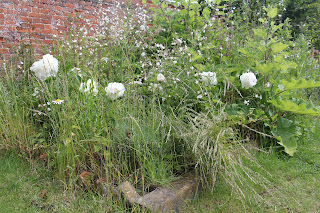 Lots of things get forgotten in the rush to stay still; blogs, dogs and gardens.
I trundled out today, peering like Mole into the sunlight, emerging from my office and a variety of deadlines to squint myopically at the world outside.
From a distance it looked quite pleasant then as I adjusted my senses, the enormity of the problem became apparent and I felt like hurtling right back in again. 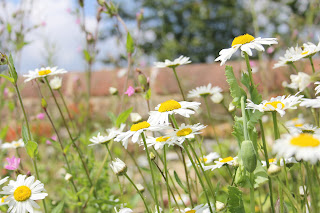 However, I knew I had to water the tomatoes and make sure no rabbits had got into the veggie plot and so girding my loins, straightening my spine and with purposeful tread I ventured forth.
And in amongst the hordes of weeds I spied the reason why there are times I actually want to be outside rather than indoors.
It is a forgotten garden but a really rather beautiful one too... 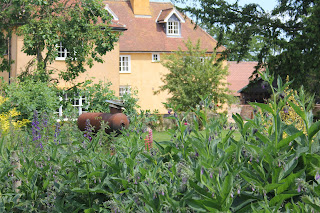