Why is it so easy to give up something you don’t have to start until tomorrow? It makes you forget yourself and become quite rash.

I have given up chocolate for the duration and everywhere I go I can feel it and it whispers sweet nothings and I start to salivate and my tummy grumbles – it’s not a pretty sight.

I have just been down to the kitchen to get myself some tea and there it was, or should I say they, right next to the toaster – 12 McVities Jaffa Cakes and 12 chocolate mini rolls. All present. All correct. And all counted by The Boy.

I should never have tried to explain Lent and the reason why we have Pancakes on Shrove Tuesday. I got carried a way by my own cleverness and have now been hoisted by my own petard.

It all started out so well on our drive to school…

Me: What day is it today, Boy?

Me: Did you know that today is a very special Tuesday? It’s Shrove Tuesday!

Hmm what does Shrove mean?

Me – not answering the question: On this day we have a big feast with pancakes to remind ourselves how good Jesus was

Him: Was he good?

Me: Yes of course he was and no more so than when he went into the desert and said no to the devil’s temptations.

Right OK a temptation, how do you explain that?

Me: You know when The Littlest is being really annoying and you want him to stop and he wont and you feel like shutting the door on him ‘cos you know he can’t reach it and you can and you know you really shouldn’t because that would be mean. That feeling is a temptation. A temptation is doing something you know you could but that you know would be wrong or mean.

My explanation is met with a wall of silence. This of course could be a good thing but experience has forewarned me that it only precedes a further onslaught.

Him: What’s the devil?

Me: A bad, nasty being who wanted Jesus to rule the world with magic instead of with love but Jesus said no even though he could have done it if he wanted to.

Him: So why do we eat pancakes? Is it ‘cos they are nice and so was Jesus?

I felt fine after this interlude, actually quite buoyed up and on returning home set about making pancake mixture in anticipation of a fun filled teatime.

As I said it all started out so well – The Boy and The Littlest in due course returned home and pancakes were at the ready, there was a lot of mess and a lot of laughter and then…

Him: Mum what are you giving up for Lent?

I nearly missed catching a pancake, as these are words I don’t like to hear and my immediate thought after the word “Chocolate” was that The Boy was spending far too much time than was good for him listening in lessons. However, my conscience was working overtime and because I was caught left field I blurted out: “Chocolate.”

Him - awestruck: So you’re not going to eat any chocolate until Easter!

Me – desperately backtracking: Well I’ll try, ‘cos were not all as good as Jesus and (oh joy I remembered Sundays off!) you can do what you’ve given up on Sundays. So Mummy can eat chocolate on Sundays but only then. That’s why Sunday’s are special.

Him: So I can have Sunday off too?

Me: I suppose so, what have you decided to give up?

I suddenly had a vision of what Sundays would be like for the foreseeable future. No more lie-in and a screams emanating from the four corners of the house…

Him- seriously: Giving up being naughty is going to be very hard.

Me: Don’t worry Darling I’ll help you. It would be no good giving up something that was easy. It wasn’t easy for Jesus.

There was a long silence as he finished eating his pancake, which was covered in chocolate sauce.

Him: I know, I’ll help you too. I could count all the chocolates then you wouldn’t be able to eat any….

I love my children, I really really do!

How to explain the unexplainable... 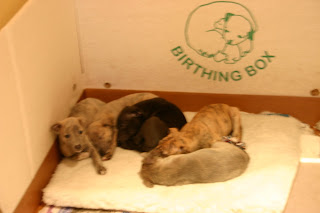 The wonderful Mud in The City has tagged me to show the fourth photo in my picture file on my computer - it was surprisingly painless.
I would like to say I was honest about it but I would be lying and suffice to say I'm a bit shy so will hope instead that this from the fourth folder in My Pictures will suffice.
It was taken when the puppies (L to R: Molly, Pica, Shadow, Mia and Gemma) were five weeks old or thereabouts. A moment of calm when they had probably been fed and were just falling asleep. Puppies like children are at their most endearing at this stage in the day.
For those not in the know and for whom puppies like babies all look a like these are whippet puppies and were Tattie's first and more than likely only litter as she's going to be seven in March and I feel that, well, like me, she's in Middle Age and should not have to deal with the sleepless nights anymore!
However, her daughter Gemma, who is now three, is off for an assignation on St Valentine's Day no less and I hope a week before the Flora London Marathon to really annoy my husband by saying whoops sorry dear the dog is about to whelp and I've got a 20 mile training run to do . So if you don't mind this one's on you... well I wasn't allowed to get out of it with my own kids. In fact all he did was loiter with intent in the corridor while I did all the work. Maybe that's a bit harsh, I think I actually suggested he leave but not quite in those terms. It was more forthright I fear at the time.
I tend to do a lot of husbandry on St Valentine's Day. Before I was married it tended to focus around neutering, I'd like to say that those days are long gone but Dear Charlie failed to inform me that he would be out tonight ...
Rules of the game are to tag a further four, so in turn I would like to tag the following (having never done this before many apologies in advance...)
MOB at http://menopausaloldbag.blogspot.com/
Pondside at http://pondside1741.blogspot.com/
Pam at http://textilosophy.blogspot.com/
Elizabethm at http://welshhillsagain.blogspot.com/
Posted by Unknown at 21:22 10 comments: