The curious case of the dog with the missing head (or is it just me who finds technology confusing?)

I love my computer but trust me I am useless with technology. I thought I was OK. In fact at one time I was really good. But that was back in 1982 and I was working in binary to make my own computer programme for the Hertfordshire Computer Diploma (Grade 1).
Things move fast in the IT world and now some 27 years (Berlimey is it THAT Long??!!!)  later, I am hopelessly out of date and frankly struggling on a daily basis just to keep my head above water.
I mean look what has happened to my Avatar - it's headless! It never used to be headless and now it is and to be honest it's not really portraying me at my best. I look ridiculous.
I even struggle with my Canon SLR Digital Camera. I was given it for Christmas three years ago and I just can't get to grips with it. I fear it has more to do with the fact that I did not choose it myself and the little problem I had with the internal mirrors, which in the end cost me £250 to replace. It now sits rather desolately on a shelf in my office gathering dust. I studiously try to ignore it because every time I notice it, I feel very, very guilty. It's one of those things I have on my "To do list" that I must get round to sorting out.
All that sounds easy compared to trying to work out how to fix your own avatar. It is NOT easy and try as I might I cannot seem to find anything out there in the great wide ether known as the web to help me - well nothing I can understand. There are 39.6 million hits on Google for "Avatar problems" and I am not trawling them all. I mean I DO have work to do you know!
So for the time being I am known to the whole wide interweb as the blogger with the avatar of a headless dog - that's if anyone recognises that it is a headless dog and not a vase or something.

I’ve not posted recently because I am in deep trouble. I don’t think I meant to do it deliberately but I posted when I wasn’t thinking. That post has caused a lot of heartache even though those that read it probably thought it was pretty harmless - but there again those that read it were not members of my immediate family.


I have read about tiffs with friends and family and even bosses and work colleagues but never thought it would happen to me. I thought I was good at this game by keeping names out, not posting pictures and keeping my blogging antics - well private. But privacy on the Internet is basically an oxymoron and you can never be too vigilant.

I think with those three lessons now firmly embedded I should keep myself out of trouble but even that aint necessarily so. Only the other week I had to edit a post even though I was praising the company in question to the skies for a brilliant piece of customer care. 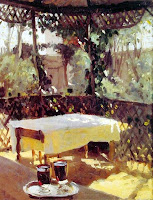 It’s never good to have high hopes is it? Knowing what was to come after we arrived at our final destination in France, I had spent hours trawling the internet, researching, refining and finally choosing the best place to stay for our one night of freedom on the way down to Brittany.

I worked hard on Dear Charlie for months to allow me to do this and to spend something in the region of £200 for the privilege. This was going to be the one night that would make the next seven bearable. It was going to be fabulous, stylish, charming – it turned out to be unremarkable, uncomfortable and just a bit tedious especially for the Boys.

I should have known as a friend remarked so sagely when I trilled about my wondrous find: “Gays and children just don’t mix.” I hate it when that happens. You tell someone about all your plans and you are really excited by the whole prospect and then they pour cold water on them – oh but how right she was…

The thing is that we don’t go on holiday often basically because we can’t afford it with everything we earn going straight to the money pit that is our home or else on the boys’ education. It’s a lifestyle choice (or the fact that we are too proud to say we’ve cocked up somewhat but I believe that that IS a kind of lifestyle choice too). Anyway we pretend we don’t want to go on holiday and would rather stay at home. But really I long to go on holidays. I love to visit new places and try out new food. I like exploring and just getting away from it all. I like being abroad if only for the fact that I adore coming home again. But enforced staycations – well come on. Who are we kidding here?

So having the opportunity to go away, even if it is with the in-laws was just too good to pass up and it was all supposed to be so perfect….

But when the start of your holiday doesn’t quite match up to your expectations it seems kind of prescient. We arrive at the Chateau and well it is rather bijou, more hunting lodge than castle. But things look up when our host offers us a drink although I should have worried a bit by the fact that he darted inside to do this leaving us to struggle with our baggage and to dump it untidily in the middle of the hall.

We were left bereft and had to venture into the house with some trepidation to find him with open bottle of champagne talking to two other guests. I was slightly non-plussed to be handed a glass of insipid white wine instead of champagne but didn’t get much chance to drink it as the boys rushed in having been released from their seven-hour confinement in the car. Let’s say they were overjoyed to be free and their exuberance was palatable.

The look on the owners face said it all and my heart did a double flip and belly flopped to the bottom of my stomach. Despite being forewarned about my boys and despite me being reassured that children were more than welcomed – it was clearly not the case. Although no words were said it was made abundantly clear that children and probably my boys in particular we barely tolerated.

I asked feebly where we were to stay and my host graciously deigned to show me stepping over our luggage at the bottom of the stairs raising only one eyebrow, and then preceding me up two flights of wooden stairs wincing at the sound of the two small elephants that accompanied us on the trip.

It sort of went down hill from there on in really. What with my boys shouting out they needed feeding, entertaining and of course needing a poo, and mine host was sort of there in the back ground - wincing. A lot.

And the final straw was being handed the bill the next day and realising I had to pay nigh on £15 for a couple of glasses of warm white wine and two small cups of orange squash that both my boys had pronounced yucky. I felt terrible with no way of redeeming the situation.

However, the gods move in mysterious ways and the next morning as I was about to leave and in the middle of shaking hands with the patron, I caught a glance out of the corner of my eye of a tray with our glasses on from the night before, still sloshing with wine.

I am afraid I disgraced myself unutterably and I probably ruined any chance of ever returning to the establishment again. Reader, I sank both glasses there and then and proceeded to wolf down the boy’s rejected orange squash as well to the horror of all. I have no idea what made me do it but I caught Dear Charlie’s eye and that was it we could hardly suppress our giggles. We made an excellent departure, heads held high and on to the next adventure.