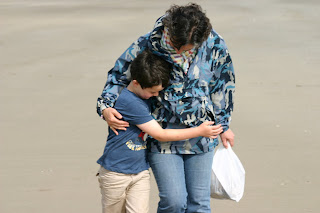 Sometimes the smallest things are the most courageous. Telling your friends that you are ill is a small thing but it is something people find hard to do; what with all the social ramifications that one, surrounds illness and two, impinges on our social belief system that different is bad.
It’s scary that those two ideas are already manifest in a seven year old. I understand The Boy doesn’t want to be different from anyone else, nor seem to be weaker than his peers in any way. He just wants to fit in and get on with life.
But life has dealt him an odd hand. He has epilepsy. Not the Grand Mal where you collapse but Petit Mal or Absence Seizures. I am not sure whether having Absence Seizures is a blessing or a curse. It could be considered a blessing in that it is easily hidden but it could also be counted a curse because it is so disguised no one actually believes that he has a problem.
The Boy’s life is a record that is always jumping, and I really mean that. For a short period of time at any point in the day and mostly several times in an hour he “blanks” for a few seconds. During this time he sort of goes away, I am not sure where, and then he comes back and carries on exactly where he left off. You wouldn’t think a few seconds would matter but I have found that there is a whole lifetime missing in those seconds. Think about it a second is a long time, it could mean life or death or why else would we talk of split seconds?
The funny thing is, with Absence Seizures is that he can carry on doing things even though he is not ‘there’, for instance, he can carry on walking, even though he doesn’t know it. Can you imagine one moment you are just leaving your classroom and the next you are six foot away from the door down the corridor? It’s not much I grant you but it would be pretty disconcerting. Or say you are telling a joke and you are about to hit the punch line and then everyone is looking at you frustratedly and you know you’ve lost your audience in that split second, or at least what you thought was a split second. Then you could be walking to your table in the school dining room with your tray and suddenly all your food is on the floor and you don’t know why.
What amazes me is that The Boy is able to cover these lapses and no one seems to think any the worse of him. It’s just the Boy. His jokes are lame, he’s clumsy, and he’s in a world of his own.
But there are times he cannot cover, these are the times when he blanks and he wets himself. Just because one part of him is not there doesn’t mean the rest of him will wait. So he stands there and does nothing while he empties his bladder.
He stands there while people shout at him and get cross or laugh at him. One moment normal; the next different and marked.
Today The Boy is going to tell his classmates why he is as he is, he’s going to open himself up to everything he fears because if he doesn’t then worse could happen. He has worked out that he has to tell people even though he will from then on be different because that is the only way he can be accepted. He has to make the moves, he has to anticipate the mood of the community he is in and he has to get them on side, and quickly. Of course he knows there will be some who will make an issue of it but hopefully his friends will show their true colours and he will not be alone.
I am not sure I could be that brave…
If you'd like to know more about Epilepsy and in particular Absence Seizures  check out these links:
Epilsepsy Action
Absence Seizures
http://www.epilepsy.com/epilepsy/seizure_absence
Posted by Tattieweasle at 11:12 23 comments:

You know the new term has started when you suddenly feel a little low and not quite right. Within 12 hours you've got a tickle in the back of your throat, three hours later the tickle is definitley sore and you know without a shadow of a doubt you've going down...
Down wid da gold.
All the symptoms were there right in front of you but you failed to do anything about them.
Welcome back to that Great Autumn Term Treat: the Common Cold - pass it on...
Posted by Tattieweasle at 21:59 5 comments:

Caught in the Act - The wickedest whippet again

Bringing up boys: the things he’d do for love…

Bog Boy is enamoured of his five-year old cousin ever since he saw her one cold winter’s evening descending from the car in a beautiful silk party dress, with fur tippet and obligatory tiara after attending her godmother’s wedding.
This ethereal being was greeted with the immortal words: “Are you a real Princess?” And she just giggled delightfully saying nothing and yet so much. He has hung on her every word and does anything she asks whenever they meet. This conquest is complete and the power from it is heady indeed. But, Bog Boy’s love is not reciprocated. His cousin has shown her favour to a boy called Max in the same class at school.
I know Bog Boy adores his cousin but I had not realized how deep his hatred for his unseen rival had grown over the year.
Last week Bog Boy was in the garden with C, who helps me with the Veggie Patch. He was excited about the imminent visit from his cousin at the weekend, and was telling C all about her while he helped rake the lawn in preparation for some more grass seed.
Bog Boy: I’m not going to marry her you know.
There was a pause.
Bog Boy: She’s going to marry Max.
There was another pause.
Bog Boy: I asked my big brother if he would kill Max but he said he wouldn’t…
Bog Boy carried on raking and said not another word to C until lunchtime.
Posted by Tattieweasle at 12:36 10 comments:

I love reviewing things especially things I like and want to recommend. And I am a sucker for the movies.
No, I don’t get to pop out to the latest big flick junket, there’s no red carpet premier for me or my family. No sneaky peeks at the latest 3-D epic but honestly I really couldn’t fit that in my already hectic social life what with parties by the River (OK it was a birthday party for a four year old) and putting on grand events on one’s estate (a BBQ), really, I’m not that bothered because I love watching movies at home.
Any movie, in fact it is quite distressing to note how very undiscerning I am. In my defence though, it’s not until you see the really bad ones that you appreciate how good the really good ones are.
Now I am not particularly tech minded and in the past that has saved me a lot of money. I mean I was so long deciding about whether to go Betamax or VHS that the market made up its mind and I landed up with a very serviceable Video recorder made ironically by Sony. It lasted year and years and years. In fact I still have it and it’s doing sterling work even now. Come on! I still can get classic movies on VHS for 10p down the road although the quality has a lot to be desired….
And that’s where my problem with Disney started. Now I am not so far behind the world that I did not also have a DVD player, I did. And I have watched some great movies on it, I’ve reviewed some great movies on it but they weren’t in Blu-Ray. Big deal I thought no worries I mean I could see everything fine and the stories are the thing aren’t they?
Well I was extremely lucky in that the very kind people at Disney thought I should be able to appreciate all their hard work by being able to view their films in Blu Ray so they sent me a Blu Ray DVD player.
Everyone was SO excited. The whole family was so excited. Not since crystal radios has my family been able to keep up with the  Joneses nay perhaps even a little ahead of everyone else in the technology stakes. That is until we tried to get the wretched thing to work.
It seems as if my TV and the Blu Ray DVD player didn't like each other much, in fact were imcompatible becuase of the simple fact that my TV is a trifle old – in technology terms. In real terms it’s only 5 years old; in tech terms TVs are ancient history in 24 months not as bad as computers which are passé in 24 weeks or as bad as mobile phones which go into extinction after 24 days…or is that mobile phone tariffs???
Anyway, in order not to lose face and have to send the gift back, I decided to buy myself a new HD-ready TV  (i.e. Hight definition ready) and to take advantage the great leaps in viewing technology and the fact that you can pick up great flat screen TVs really, really, cheaply nowadays. Or so I thought.
If this should ever happen to you do NOT, I repeat NOT take your partner/husband/father/father-in-law or in fact any male member of the species with you to Comet  just days before the First Test Series/World Cup/Masters etc in order to salvage your conscience about getting a freebie. It is expensive. Very expensive.
But I hear you say was it worth it? Well £500 for a new state of the art 36” flat screen TV, which is so clear I hardly have to wear glasses anymore...yup it was worth it and as for the Blu Ray? Come on Guys what are you waiting for, it’s brill!
PS: Many apologies to Disney I had a mad techie problem and this was posted (or something pretty similar but I lost it) on what I thought was a really cool stand alone Review site attached to my main blog. But it’s not and I’ve lost that and a whole load of other stuff somewhere in the ether, if anyone comes across it please could they point me in the right direction!!!!
Posted by Tattieweasle at 21:09 5 comments: