As a youngster this caused me great anxiety as I frequently had no idea. I think we moved so many times that I sort of gave up working out where I lived as I couldn’t explain exactly where HOME was. I still can’t: HOME is where my parents are and despite the fact that I cut the umbilical cord over half a lifetime ago, HOME is still where they are. It’s easier that way – tho’ causes my husband considerable consternation. I grew up an itinerant wanderer – basically a modern day camp follower. I hasten to add that my mother’s morals have always and will always be above reproach. Camp followers have such a bad press. By the time I was six I had lived in six different homes and had attended six different nurseries and schools. These were formative years and although I went on to be incarcerated at boarding school for ten years, the confusion about where I live, where home was and even who I was, was so deeply embedded that when the question is asked I can feel my heart beat faster, and my mind goes blank and out pops the answer: “With my parents.” This obviously causes raised eyebrows at social functions and my reputation is somewhat suspect. In answer to the question I now live in the depths of wildest Suffolk where the rabbits play chicken with your car at dead of night and Pheasants fly in low on kamikaze missions determined to drive you off the road. This is our final resting place - leastways says my husband who has never fully recovered from the move seven years ago from London. (I blame it on too much Styrofoam and bubble wrap) - and from the comments made by the parents on viewing our new home back in 2001 probably our nemesis as well. The story of its acquisition, like all good tales sees prospective owners Charles and myself falling in love with it, offering for it, nearly losing it, then battling it out with rivals to secure it for ourselves. A story of passion, skulduggery, hope against hope, and finally….my mother calling it Cold Comfort Farm and muttering about woodsheds while my father stared ashen faced refusing to say a word. It was and is a BIG project but one that is keeping us entertained and hopefully allows us to entertain in turn. Just to clear the outside to see what’s there, Dad estimated he would need 10 men working 4 weeks solid – his chainsaw went into ‘hospital’ after a mere 36 hours. Rookyard makes me laugh and not always with hysteria. We have woods, meadows, a fabulous moat, a hemp plantation - found in a secluded corner of the property - and of course the house itself with twisty corridors, undulating floors, inglenook fireplaces and at the beginning our very own mushroom cupboard providing delicious fungi for breakfast! Boy, have we moved on since then…several builders later and we are almost there but at the moment jus - we have run out of money and now must make do and mend…but what fun we’ll make it - it’s either that or going completely mad!
Posted by Unknown at 20:28 2 comments:

Shall I compare thee? 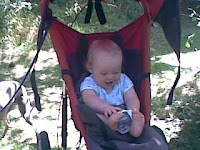 Shall I compare thee to a full time Mum?
Thou art more grumpy and intemperate
Thy work does use up all thy spark and fun
And my childhood is all too short a date:
Sometime too late thou may remember this,
That while thou workest I play alone
Some stranger holdest me and wins a kiss
That by rights is only for thee to own
But no it is not yet too late for thee
Shake off the clouds of deepest despondancy
Shut up thy work and come now and follow me
For the sun does shine on us right joyously
So long as we can breathe, or eyes can see,
So long lives this, and this gives life to thee.